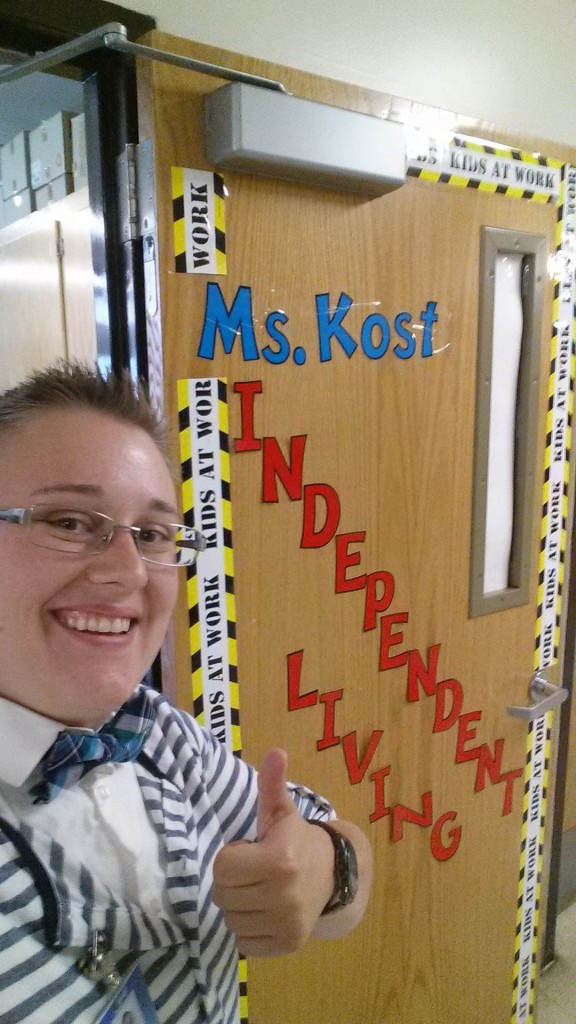 This is an original blog post by Sara Kost (@Sara_KostMN), an out teacher from Minneapolis.

It was never a question for me, whether or not to be out at school. Even throughout my undergrad, in all of my education classes, and during my student teaching, I was out. After coming out when I was 16, there was no way, I decided, no way I’d go back in the closet as a teacher.

“But what about the Administration? What if they don’t like that?” she asked.

“Then I don’t want to work at a school like that,” I responded.

“But what if you can’t find a job? Can you really afford to be choosy?” Mom replied.

I know she was just worried for me, but I bristled at her suggestion that I hide my sexuality for a job. I couldn’t do that. It just wasn’t an option.

You see, my outward appearance usually clues people in to my sexuality. I’m fairly masculine. In lesbian lingo, I’m butch. There’s no way I would sacrifice my comfort just to dress a bit more passably feminine. I’m just not comfortable in feminine clothing. I feel so much more like myself wearing clothes from the “men’s” section.

It still took me a while, however, to feel comfortable going to job interviews in a very masculine-presenting suit and tie. I want the people I interview with to understand right from the start what they are getting with me. I don’t have to say it in the interview, my outward appearance says it for me. I’m gay, and I look like it. But that can be a double-edged sword. I don’t have to come out, my outward appearance does that for me, but I also don’t have the protection that conventional outward gender appearance offers, like the ability to claim straight privilege if needed.

I do sometimes wonder how many teaching positions I lost because of my appearance during the interview. I know of one for sure. Early on after I graduated, I had a job interview at a private school where they asked if the required dress code for women (a skirt) would be a problem for me. I said that it would be. Obviously I didn’t get that job, but oh well. I wouldn’t have felt comfortable, or even remotely like myself, and therefore I wouldn’t have felt like a good teacher.

Feeling comfortable is fundamental to my ability to work with my students. I am at my best as a teacher when I am my most authentic self. I think we’ve all had days as kids, as teens, and as adults, days where we throw on an outfit only to realize after we’re out of the house that it doesn’t fit right, or colors clash, or just doesn’t look good, and we feel awful and awkward the rest of the day. We don’t feel like ourselves. In that same way, I only feel like myself when I dress and outwardly appear masculine.

I’ve never hid anything from my students. It’s freeing, being an open book. I don’t have to worry about what to say or how to phrase things. (i.e. girlfriend/partner vs. “friend”/“room-mate”) That doesn’t mean I disclose to them everything about my life, but in general if they ask, I’ll tell them. I want them to know that I’m human. I want them to know that I have a life, a family, hobbies outside of school.

For instance, I have a bunch of pictures on the wall behind my desk of my family, friends and my partner. Whenever students come up to my desk, they’ll stop and look at my pictures, and sometimes they’ll ask about them. 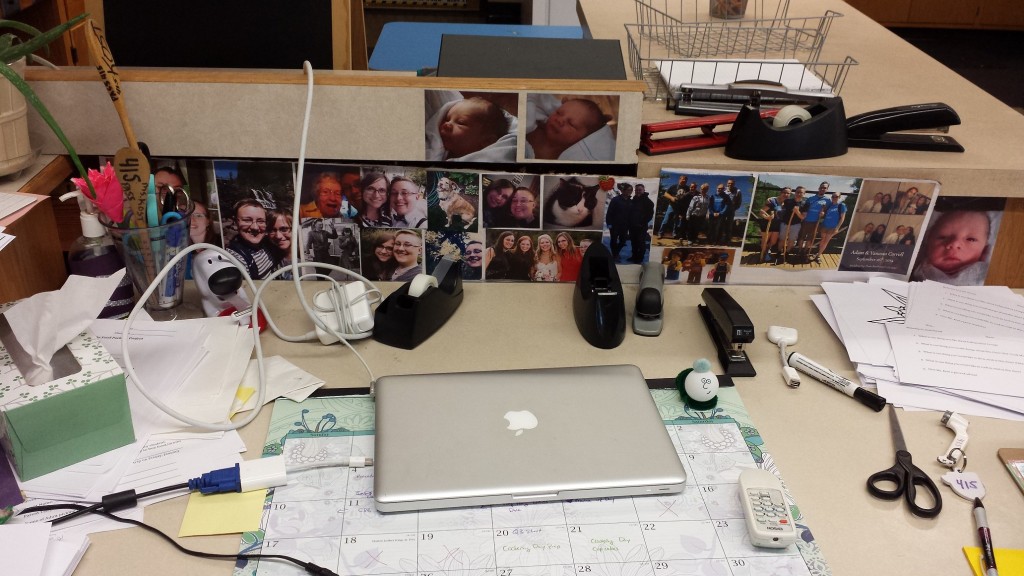 “Yep, that’s my brother and sister-in-law.”

It’s all very matter-of-fact, as it should be. I believe being honest and open with my students builds better relationships with them. My honesty builds trust. And sometimes, I may be the only gay person my students know. I put a face to the label. I challenge their preconceived notions.

Most importantly, for my LGBT students, I am a role model for them. I can be a beacon during their adolescence, a symbol of hope for them as they come out. As a queer youth, I didn’t have many out role models, so I want to be the kind of role model I needed when I was young. I want to show them that they can grow into a productive, happy LGBT adult too.

Being an out teacher has it’s challenges, but I am so lucky to work for a great school where I am supported and appreciated for everything I bring to our team and our students.