As LGBT+ people, we are permanently coming out – It’s rarely a one-off. Whenever we meet someone new, there is that potentially awkward moment when you don’t know how they will react if you slip it into conversation. Here’s Jacqueline Collins’ positive story of coming out twice at school.

Teachers don’t have to share their personal life but I am the type of teacher who doesn’t mind sharing parts of my life – therefore hiding an important part of who I am felt like I was somehow cheating the young people I work with. The first time I came out happened through chance more than planning, however.

On a school trip to London, I had bought a watch for my partner and on showing the other teachers, the beady eyes of my S3 girls clocked this and said ‘Aaaw is that for your girlf…..I mean fiancé? In that split second I made the decision to roll with what she was going to say and said ‘yeah, it’s for my girlfriend’ before quickly moving the conversation on. I noticed a few glances between the girls but no issues. I did however begin to worry about what would happen when we got back to school! Back at school there were no issues and two weeks later the girls very sweetly and discreetly asked ‘did she like her watch?’ I said ‘yes she loved it!’ For a straight teacher this would be no big deal I imagine but it was this acceptance from the girls that a year later gave me the courage to embark on a journey that has been both humbling for me and empowering for our LGBT+ pupils.

I decided to start an LGBT+  allies group and the first lunch-time we did this was my second coming out! In conversation I explained what the group was about and told the pupils who had turned up that my reason for starting this is because I want every young person to feel part of our school community… a feeling that I didn’t have as a gay teacher when I first started my career. This subtle coming out meant that I was no longer looking over my shoulder and worried that a pupil would find out and somehow use my sexuality against me. I owned it and I was proud! From this, I could not be prouder of the pupils and staff at my school! Our LGBT+ pupils feel more accepted and we have empowered our allies to know that they have a significant role to play in this journey. Our LGBT+ allies group run campaigns, fundraise and play a vital role in promoting and celebrating equality and diversity within our school.

Jumping the final hurdle in my own gay journey was scary and not without its challenges. I can honestly say however that my experience has been a positive one. Being able to fully be myself has made me a better teacher and losing that final little bit of ‘gay shame’ has given me the confidence to lead change within my school.

We can never underestimate the power of acceptance but we must never lose sight of the difficulties LGBT+ teachers face. Fear and shame are powerful and at times debilitating emotions that are hard to lose. Without the the support of both the staff and pupils at my school I would not have had the courage to come out. I feel lucky to work where I do because many teachers do not feel able to take this step due to a lack of support. It has taken me a long time but I am proud to be a gay teacher and I am proud to be a role model for young people.

As they navigate the many difficulties in life and through the minefield that is adolescence, it is my hope that they can believe that being LGBT+ is an important part of who they are. But sexuality and gender need not define them and it certainly does not need to hold them back in any way. I teach all young people to be respectful, be proud, be ambitious and be the very best version of themselves that they possibly can be. Doing this with rainbows, I believe, just makes everybody’s world a little more colourful! 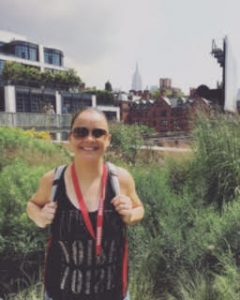